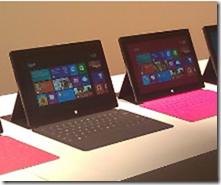 The impression Microsoft is giving this week is almost one of desperation, and of a company willing to do anything to maintain its position at the top of the food chain. First came the surprise showing of the new Microsoft Surface hardware, which looks really nice. Then came a preview of the next big version of Windows Phone that looks compelling. These two previews show that Microsoft is willing to push anybody out of its way.

The Surface tablet announcement caught not only industry watchers by surprise, but also Microsoft’s biggest partners. These companies, HP, Dell, Acer among them, had no real warning that Microsoft was about to compete with them. They are now in direct competition with the company that supplies the OS they use on all of their PCs. The entire PC industry changed with the Surface announcement.

With the Windows Phone 8 preview, MIcrosoft left its partners alone and went after its loyal phone customer base. Buried in the talk of new features, better hardware, and a new start screen, the bombshell was dropped that no existing hardware bought previously or even between now and Windows Phone 8 launch later this year will run Windows Phone 8.

This week at Microsoft: Throwing everybody under the bus